Aims: This study was carried out to study the optimized condition for microalgae cultivation in terms of light intensity, and nutrient supply. Also, use of a carbon source was studied to optimize the microalgae growth to produce microalgae with a high biomass productivity and a high lipid content.

Background: Algae can be categorized into macroalgae and microalgae. Commonly, microalgae are used to produce biodiesel since microalgae can yield 5000-15000 of oil gallons compared to plant-based biomass as feedstock produced 50-500 oil gallon. Furthermore, microalgae do not face any food crisis and can be cultivated in any wasteland that is not suitable for agriculture throughout the year, compared to crops. Microalgae can also be cultivated in freshwater, saline water and wastewater.

Results: The effect of light intensity, NPK fertilizer, and glucose on microalgae’s biomass production will be observed simultaneously. At the end of cultivation, MX2 obtained the highest biomass of 97.186 g. The oil extraction yield is 9.66%. GC-MS analysis showed the presence of UFA and PUFA in the oil.

Conclusion: Thus, future research is needed to improve the technique to increase the microalgae biomass and lipid to become the potential feedstock for the production of biodiesel. 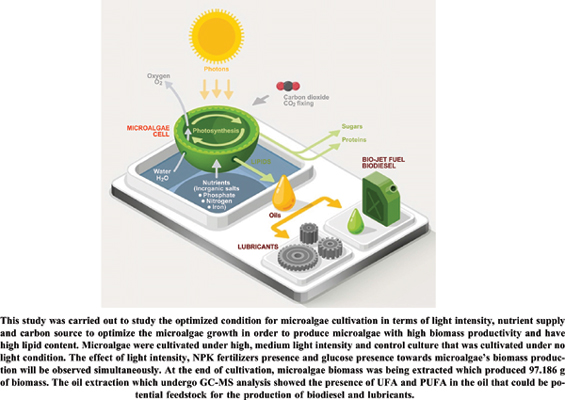